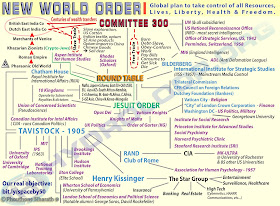 Around AD1400, European power centers coalesced into two camps:
The Guelphs and Ghibellines (English pronunciation: [gwɛlfs], [gɪbəliːnz]) were factions supporting the Pope and the Holy Roman Emperor, respectively, in central and northern Italy. During the 12th and 13th centuries, the split between these two parties was a particularly important aspect of the internal policy of the Italian city-states. The struggle for power between the Papacy and the Holy Roman Empire had arisen with the Investiture Conflict, which began in 1075 and ended with the Concordat of Worms in 1122.

Many black Popes allied themselves with the Guelphs. All modern history stems directly from the struggle between these two powers.

The Guelphs are also called the Neri, Black Guelphs, or Black Nobility, and supported William of Orange in his seizure of the throne of England, which eventually resulted in the formation of the Bank of England and the East India Company, which would rule the world from the 17th century. All coup d’etats, revolutions and wars in the 19th and 20th centuries are centered in the battle of the Guelphs to hold and enhance their power, which is now the New World Order of the British Empire. 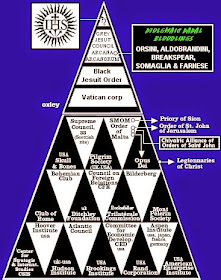 So you thought you knew who the bloodlines were within the Illuminist covert system? You do not know the bloodlines in complete control of this planets populace. When you view these videos, you will finally be in the knowledge of the real thirteen bloodlines that rule the World behind the gray shadows.

These are the real Illuminati, the real Saturnalian Brotherhood Birth Certificates
Your High level Masonic Knights of Malta representative politicos bend their knee, And here is the list of birth certificates of this Nobility, the REAL Zoroastrian Bloodlines of the Illuminati, which you will see below as the obelisks of Rome:

Here is the list of The real Saturnalian Brotherhood descendants:
House of Borja, House of Breakspear, House of Somaglia, House of Orsini, House of Conti, House of Chigi, House of Colonna, House of Farnese, House of Medici, House of Gaetani, House of Pamphili, House of Este, House of Aldobrandini {Satan}, House of Pallavincini. These are the Egyptian Ptolemaic Dynasty Rulers in full control of the Company of Jesus, High Grey Council of Ten pulling the strings of the Jesuit Superior General, The Black Pope, controller of the White Pope. This is the Ultra hidden ruling fist from the grey zone. The foundation and binding for the visible white and black Egyptian duality system.

Both the White and Black Pope of modern times lack the blood of the Papal Nobility as these Egyptian masters seek to further veil their existence unlike in times of old when they openly ruled. Welcome to the Arcana Arcanorum Rite of Atlantis. In the Biblical historical record we read that the Israelite’s were captives of the Egyptians. We read that Jewish Merchants insisted before Pilot they had no King other than Caesar in Rome. They demanded Jesus be put to death, this was also prophetic as it was foretold 700 years before it happened that it would happen.

The modern day SMOM Court Jews known as Satan’s seed are subservient to the Jesuit Order. These families are ancient bloodlines going back to Rome, and Egypt, they have mansions, castles in Venice, Rome, in Italy. Now some try and claim that the Rothschilds control these families through banking. Thats impossible because the bank does not own these families vast wealth the bank merely protects it. These Families control the Rothschilds.

Are a few power-hungry Jews the controlling influence behind the banks, Or is something else going on? All of this is basic, but most people don’t make the distinction that the Hebrew people are called Jews. Just like you might call an Irishman catholic, the word Jew describes a religion just as does the word catholic. Yehushua made a distinction between Hebrews like Himself that were also known as Jews and those that called themselves Jews and were not. Yehushua called these Jews Satan’s seed.

The Crypto-Jews Yehushua was pointing out were Satan’s spiritual children. These are a group of people that wish to carry out Satan’s will. They are responsible for killing the prophets of Yahweh and Yehushua. How do you tell the difference between these men who claim to be Crypto-Jews but are really Satan’s seed? There’s only two ways that I see in the Word of Yahweh, one is by being able to see these persons true spirit by the gift of spiritual discernment and the other is, you can always tell someone’s true spiritual nature by their fruits (actions).

I hope this explanation will clear up some of the misinformation which claims “Jews” rule the roost when referring to some Crypto-Jews that are not servants of God Almighty, and call themselves Jews. This is rather confusing because both groups go by the same name and claim the same roots, but Yehushua made this distinction, so must I. One of the reasons these men hated Yehushua was because He made this distinction and exposed them.

As the Jewish elders asked Pontius Pilot a Roman Centurion for permission to kill, murder, Yehushua we see them being subservient to Rome. Nothing has changed. The Hof-juden Papal Court Crypto-Jews (who call themselves Jews) serve the Papal families listed above. We should probably call them the Tribe of Canaan.

“It is a somewhat curious sequel to the attempt to set up a Catholic competitor to the Rothschilds that at the present time the latter are the guardians of the papal treasure.”

The golden rule applies, and the Papal bloodlines listed above are the wealthiest families operating within the Secret Societies. They rule them all.

THE LUCIFERIAN CHAIN OF COMMAND;

Papal Nobility Gray Jesuits, Black Jesuits, Holy See, Equestrian Order of the Holy Sepulchre of Jerusalem, Sacred Military Constantinian Order of St George, Knights of Malta, The Alliance of the Orders of St John of Jerusalem, Crown of New Jerusalem, military-industrial-pharmaceutical-educational complex aka Fuellers-Mercers-Apothecaries-Haberdashers, then you have of course your corporations and military intelligentsia all in that order.

In a nutshell that is the power system. Remember that the Knights of Malta were handed the Templar power and wealth in 1312 by the Ad Providum Papal Bull. The Equestrian Order of the Holy Sepulchre of Jerusalem has the most Cardinals of any of the Orders, closely followed by the powerful Sacred Military Constantinian Order of St George controlled by the House of Bourbon aka Farnese continuum.

King Juan Carlos is the head of the Farnese continuum and he’s a high level Knight of the Equestrian Order of the Holy Sepulchre of Jerusalem, Sacred Military Constantinian Order of St George and a Knight of Malta all wrapped up in one. His competitor, the Prince of Naples, Vittorio Emanuele IV who tries to claim the King of Jerusalem title, is also in all of these Orders and is the commander of the Canton in Switzerland known as Geneva. Geneva and Zurich being of most importance to the financial system whilst noting Berne the Capital of Switzerland being the home of the Vatican Embassy one corner away from the Universal Postal Union which controls the commercial World.

An excellent deception has many believing the Jews are in control of the world. Some graduate out of this deception, while others keep enforcing it because they’re likely establishment agents purposely misdirecting researchers away from the real controllers.


Saturnalian Brotherhood – The Real 13 Zoroastrian Bloodlines of the Illuminati :
* = Most powerful bloodlines

The Jesuits may have authored the Protocols of the Elders of Zion but the real masters of this work was the Vatican in 1482 within Rome some fifty-two years before the founding of the Jesuit Order by Alessandro Farnese and the Aragon Knights Templar continuum power of Francis Borgia and Ignatius Loyola.

The marriage between the Rothschild’s and the Aldobrandini’s is between David de Rothschild and Princess Olimpia Anna Aldobrandini. The family named after the very important occult Aldebaran bullseye star mentioned in the Rolling Stones song 3000 Light Years From Home.
Share
‹
›
Home
View web version